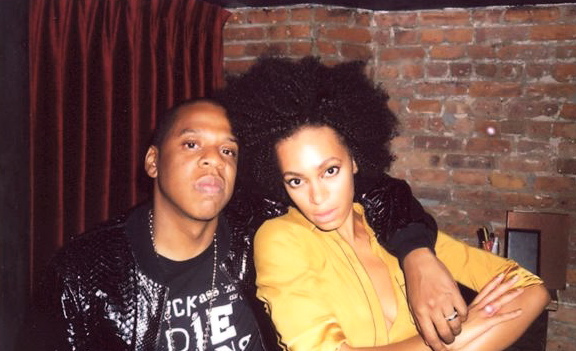 On Monday morning TMZ released a video in which Solange Knowles is reportedly attacking her brother-in-law Jay-Z in an elevator of the Standard Hotel during a Met Gala after-party. In the video you see that as soon as Solange enters the elevator, she starts hitting and kicking Jay-Z while he tries to keep her at arm’s distance. A bodyguard intervenes and tries to hold her, but Solange attempts to hit him again several times. In the meanwhile Beyonce stands in the elevator with them, getting at first close to her husband for a few seconds, and then returning to stand near Solange. The video so far has no audio, so no one, except the interested parties, knows exactly what happened and originated the irascible and violent misbehaviour of Solange.

As soon as the video came out, the Internet exploded and social media users didn’t waste any time in posting memes and sarcastic tweets, joking about an accident that is not funny and actually pretty intense. Celebrity gossip makes our day lighter and entertains us during our coffee break. It is also extra juicy that it shows one of the most perfect and private families in celebrity stardom. However, we should not forget that the video also shows a violent family conflict.

Hashtags like #WhatJayZSaidToSolange and #Jayz100thproblem were trending on Twitter all day and comments like: “what did Jay-Z do wrong?” “Did he cheat on Beyonce?” “Did he offend her?” populated the web as somehow there could be justification to Solange’s attack. I think this is the typical example of how we react towards violence when a male is the victim and the female is the perpetrator. We think this is sort of funny or that the woman is justified in her violence because the man did something wrong to enrage her.

Had the situation been reversed the reaction would have been totally different. So here comes the double standard, when the woman is the victim of the attack, everyone points the finger to the man accusing him to be a monster, violent and disrespectful. When the woman, as in the case with Solange, is clearly the aggressor we still blame the male for originating the attack and we take the episode in much light-hearted way.

At some point we have to acknowledge that violence is always bad and serious whether the victim is a man or a woman. It is certainly true that women are more commonly the victims of domestic violence and that men are physically stronger and therefore much more capable of hurting a woman, but  the act still deserves to be condemned. Feminists continue to fight for equal rights, but to be treated on the same level of men we have to take responsibility for our bad behaviour when it happens. This means accepting equal blame by the public and the media when we are in the wrong.