In my previous post, Paris City Guide – Part I, I briefly mentioned the Moulin Rouge and the time I spent there. Now is my chance to shine the light brightly on this historic troupe. I attended the show, Le Feerie and interviewed Fanny Rabasse, their resident PR Manager. It was a dream come true, and the show gave me goose bumps. I was very curious to learn more about one of the most fascinating cabarets in the world and I am sure this interview will let you into the magical world of the Moulin Rouge.

Can you give us an overview of the history of the Moulin Rouge?

The Moulin Rouge is one of the oldest cabarets in Paris. Established in 1889, the same year of the Tour Eiffel, and will celebrate its 125th anniversary in October. In the beginning, the owners of the Moulin Rouge wanted to create a place where the French Can Can could be performed. It was instantly a great success, first of all because the Moulin Rouge attracted a disparate and mixed crowd, whether rich or poor, which was unusual for the time; and secondly thanks to the painter Toulouse- Lautrec who created the first poster of the Moulin Rouge in 1891, which portrayed the first dancer called “La Goulue”, from which the poster takes the name, showing her bottom. It was advertised all over Paris and it became an international scandal. In the first Moulin Rouge there was no stage, the dancers were dancing among the guests, the Goulue was famous for taking off men’s hats by kicking her leg. It was not a proper show, it was a bit of Can Can, there was a singer and an orchestra, it was very different from what we are used to now. When the original Moulin Rouge was burnt in a fire in 1915 it was rebuilt 9 years later as a theatre, with a stage. The show also changed and incorporated feathers, sequins and the first topless dancers. In 1940 during the Second World World the Moulin Rouge closed and became a cinema until the 50s when it reopened its doors with luxurious renovations. The program included dancing, acting and French Can Can and nothing has changed since then.

Do you think the image of the Moulin Rouge has changed since its creation over a century ago?

What do you think makes the Moulin Rouge standout as a cabaret show especially since it has been so widely imitated?

We tend to imitate what is the best and the Moulin Rouge is number one. The one and only original French Can Can is and will always be the one performed at the Moulin Rouge.

What are some of the traditions of the Moulin Rouge that remain today?

Can Can is the main and most important tradition that we keep alive, in the show Le Feerie, the Can Can is performed for circa 7 minutes. Another big tradition is represented by the production of big glamorous shows and amazing costumes with big feathers.

The movie definitely attracted a younger audience, but it is different from the reality because the movie is like a fairy-tale, but simply because it is represented in such a dreamy way people want to see the real one. So they come here and they are not disappointed at all. In the real Moulin Rouge we have amazing settings and costumes as well. For us it was great publicity and we were the first ones to read the script and actually worked with them for two years.

What do you look for in a Doriss Girl?

Miss Doriss was the Moulin Rouge’s famous ballet mistress and created her own troupe of dancers, named the “Doriss Girls”. Originally there were only four and now the troupe numbers sixty. The Doriss Girls are recruited from all over the world. Since 1997, Janet Pharaoh, the new ballet mistress holds auditions in cities as diverse as Las Vegas, London, Sidney and Stockholm to find dancers who are able to join the show and perform on the Moulin Rouge stage. Some criteria are compulsory, a good base of classical ballet training, the girls have to measure at least 1.75 m (5’8”) and the boys must be more than 1.85 m (6’3”), have astounding figures, a unique personality & energy and a kind of beauty that is different, we don’t want our dancers to look alike, that is why more than 14 nationalities are represented.

How important are costumes and set design to a production?

Costumes and set design are the number one budget so they are very important, they represent the 60% of the show. 8 millions of Euros were required for the creation of “Feerie”. All the 1000 costumes of feathers, rhinestones and sequins are designed by Corrado Collabucci and handmade in the most famous Parisian workshops. Maison Clairvoy, purchased in recent years by the Moulin Rouge, creates hand-made shoes with a unique savoir-faire of the French Can Can boots. Maison Fevrier, owned by the Moulin Rouge too, is specialized in the creations of feathers. The sumptuous settings with shining colours and unique designs are created by Gaetano Castelli and made by Italian artists.

How long does it take to create a new show for the Moulin Rouge and how does it all come together?

I would say minimum 3-4 years in advance. The next show is ready but we don’t know when we will release it. Every time that a new show is ready we need 2 years to make the costumes, shoes, and settings and when everything is ready we close the Moulin Rouge for 5-6 weeks. Then we re-audition all the dancers who have to learn the choreography.

How does the Moulin Rouge remain relevant given people’s connection to a digital or online experience?

We have a FB page and we are going to have a Twitter Page soon. The majority of our customers are buying their tickets online, and we manage our bookings and seats with iPads, so as you can see we are keeping up with digital trends.

Could you tell us something more about the show “Le Feerie”?

It was created in 1999, so it has been shown for 15 years. In each show there are 4 main scenes and each of them tells a story. We want people to dream in the tradition of French musicals. In the first scene there is a touch of nostalgia, the audience enters the “Garden” of the Moulin Rouge to discover the magical atmosphere of the place. In the second scene pirates find their boats anchored in Indonesia. In the third scene the circus come to town and in the forth scene there is a tribute to Parisian women throughout the years and the Doriss Girls dance the famous French Can Can. It has been the most successful show for us.

What are some of your favorite moments from being involved with the Moulin Rouge?

My best experience was when The Moulin Rouge was invited to perform at the Carnival of Rio, in Brazil. We were the first foreigners to have a float and we had 1.500 articles from all over the world talking about this. When we arrived at the airport there was also a band waiting for us playing La Marseillaise. It was absolutely a great experience and I was very proud. 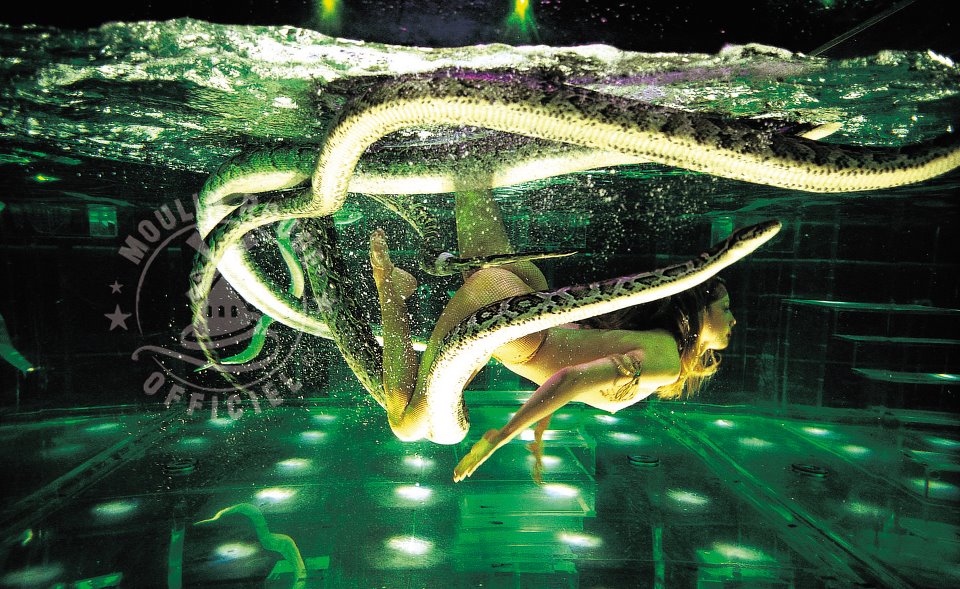 What are some exciting things you can share about the future of the Moulin Rouge?

We have an upcoming show but I cannot say anything about it. The only thing I can say is that, like all the shows of the Moulin Rouge, the title will begin with the letter F.  Hopefully we will be here for at least another 125 years!

Interesting Facts about The Moulin Rouge:

1000 costumes of feather, rhinestones and sequins

1 aquarium of 40 tons of water