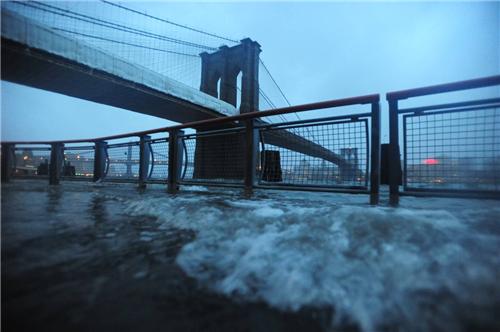 New York, NY – We are in the midst of an incredible storm that is bearing down on the entire East Coast of the United States. Named Hurricane Sandy or more ironically in the twitterverse “Frankenstorm” weather experts and aficionados have never seen anything like this. What makes this storm unique as compared to previous storms is the combination of several striking but rare circumstances in order for this “perfect storm” to occur. First, Hurricane Sandy is a category 1 storm but it’s a function of its path and the accompanying storm swells that really make this storm special. Second, there is cold air coming from the north that could add to the heavy rain with wet snow and even blizzard conditions as you go further north. Third, an existing early storm coming east is adding to the low pressure which  threaten to keep Sandy in the area circulating and adding moisture which could lead to more water and more flooding. There are other nuances out there but this gets us where we need to be. In short, storms like this don’t happen all the time and it took several rare factors to come together at just the right time to make all of this possible. As frightening as this weather could be it’s the randomness of seemingly unconnected events that have made this our stormy reality.

In this scenario, this hurricane is not unlike falling in love. Falling in love requires several seemingly unconnected or at least random events to happen at just the right time to make it possible. The ensuing upheaval is one that leaves us off center, uncertain and generally disconnected with our new reality as we replace one state of being with another. When love strikes, much like hyped reports of bad weather it seems like it was inevitable all the time. “Of course, the storm was going to hit”. “The reports have been consistent. We saw this coming” In reality, it wasn’t all that obvious nor was it inevitable. If one of these factors had changed then the entire scenario unravels. Love is like that in many ways. The random happenstance of meeting makes odds of a strong union slimmer than we like to think. Upon meeting all of the other ingredients have to fall into place as well. Timing, life outlook, desire (physical & mental), values are a few of many puzzle pieces that have to be in place to give you a chance at love. It is much talked about but a lasting, satisfying love is as rare as a weather event like Hurricane Sandy and requires just as many elements to fall into place to make it a possibility. Hurricanes are destructive in their relationship to our fragile lives and the society we have built but they hold no malice in their nature. That is the critical point, a hurricane is a force of nature. It is wholly unpredictable, violent and beyond our reach to grasp its power. Love is also a force of nature and has many of the same traits. All of our words, whether high poetry or logic cannot explain love but that lack of explanation doesn’t deny the significant almost disruptive effect it has within our lives. Even the language we used to describe falling in love “I was swept away” “ I was knocked off my feet” sound like the destructive force of a natural act similar to a hurricane. Hurricanes are frightening and costs lives but it is just nature doing what it does as tragic as that may be. Love is also one of nature’s random forces and when those forces combine and it sweeps into our lives we should be prepared to go with it and get swept away in the best way possible.