The Loves of Aaron Burr: Portraits in Corsetry & Binding – A ReviewArticle by: Ronnie Spirit 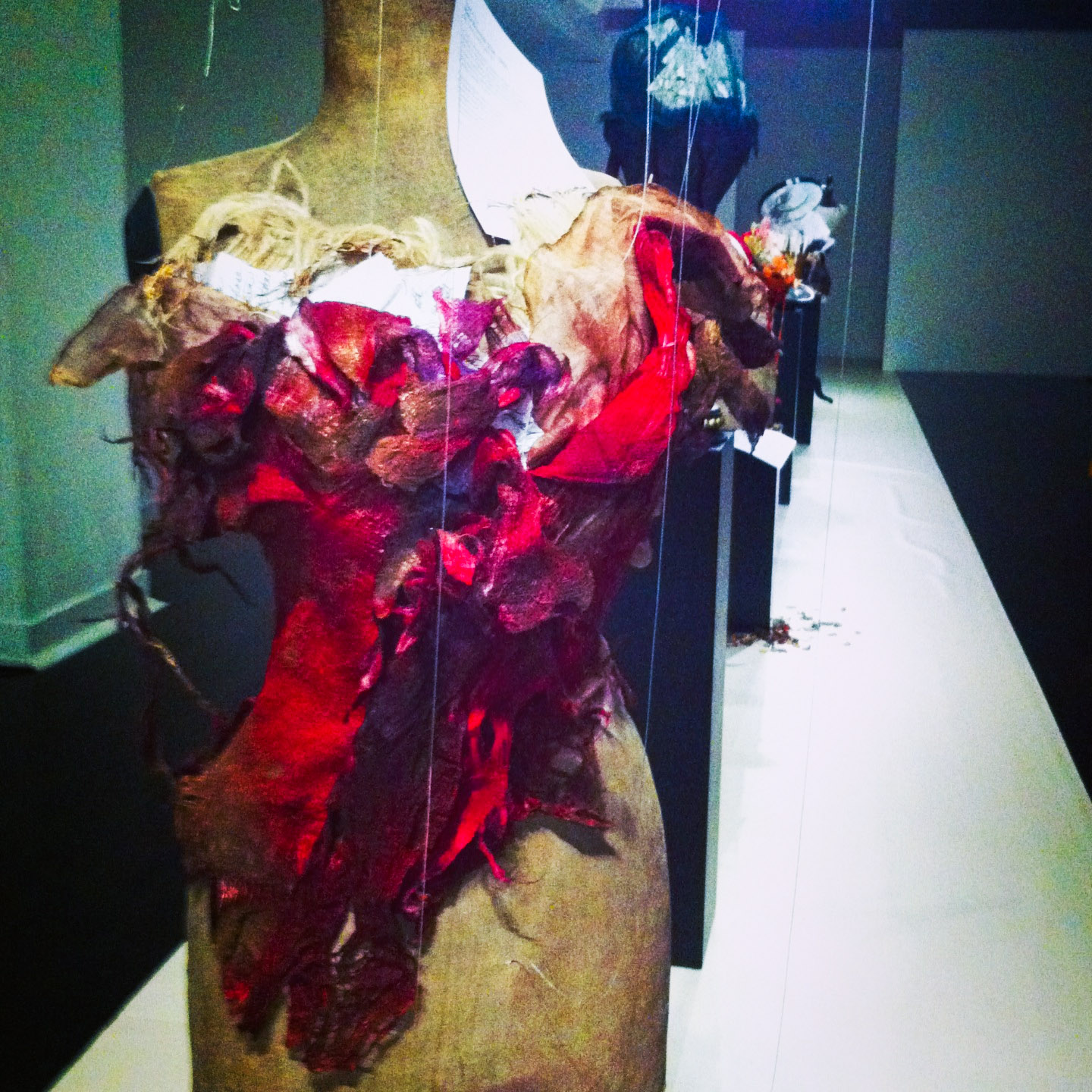 After watching burlesque dancers and pregnant models strut down the runway at Lingerie Fashion Week SS14, I thought I’d witnessed most of what female undergarments can say to the viewing public. Only with the closing party’s pop-up exhibition did I realize the true extent to which women’s intimate apparel can tell a story.

The Loves of Aaron Burr: Portraits in Corsetry & Binding, an exhibition by Camilla Huey, appeared in the place of the runway after the last show as if by magic. As I marveled at a pale blue boned corset exploding with paper flowers, a man approached me and began to tell me the fascinating tale of Margaret Moncrieffe, one of Aaron Burr’s several remarkable loves and the inspiration for this particular piece.

Apparently, the fourteen year-old Moncrieffe had a bit of a crush on the then twenty year-old Burr. One day, he witnessed her doodling flowers in her notebook with such concentration that a thought occurred to him. Perhaps this bright, young lady was doing more than capturing nature with her pen. Since her father was a British major, Burr suspected that the floral images formed a code by which she could spy for the Brits without appearing suspicious. The flowers in the piece burst from a book at the breast of the corset, presumably Moncrieffe’s autobiography, the first ever to chronicle the life of a courtesan.

After listening to this story with utter disbelief, I learned that the man who told it was Kurt Thometz, a private librarian and husband of the artist, Camilla, whose expertise in corsetry extends to her studio in the garment district, The House of Execution. The two of them studied the life of Aaron Burr through whatever documents they could gather for six years before Camilla put together the corsets. Each one overflows with stories, often literally, as paper narrowly escapes the bindings of many pieces. They all stand for a different, important woman in Burr’s life.

One of the first male feminists, as well as one of the only founding fathers to hold an anti-slavery agenda, Burr has been slandered for over two hundred years. Camilla and Kurt took the time to get to know him as a son, father, and lover through letters and other documents, ultimately providing a view into his heart and mind through the women who gave him those titles.

The exhibition made such an impression on me that I traveled all the way up to 163rd St. to the Morris-Jumel Mansion to see it in situ. Visiting the corsets in the rooms of the old mansion, where Burr lived for a time with his latest lover, Eliza Jumel, made me feel like I was welcomed into the secret life of a man I would never have otherwise known. The loves of his life communicated more to me than Burr himself ever could, their incisive writings bound close to their bosoms but on view for the public. Whether your interests lie in history or fashion, I would recommend taking a trip to meet the women who graced the buried stages of Aaron Burr’s life.